The Resistance: Avalon
Out of Stock

The Resistance: Avalon is a standalone game, and while The Resistance is not required to play, the games are compatible and can be combined. 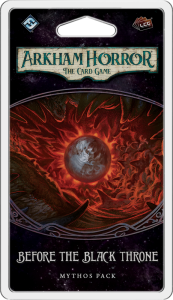 Arkham Horror: The Card Game – Before the Black Throne

Before the Black Throne is the sixth and final Mythos Pack in "The Circle Undone" cycle for Arkham Horror: The Card Game.

After your battle to close the rips in reality in In the Clutches of Chaos, you have left your city and your world behind, traveling an impossible distance, and yet you are still many leagues from the nighted throne where your ultimate foe stirs. As you are chased by your fate across the cosmos, you may be forced to bring "empty space" into play, losing the top card of your deck as you place it facedown to embody the seemingly infinite space that divides you from the rest of humanity. This is not a location; it cannot be entered or investigated, and the only way to reclaim your lost card is to fill the empty space with a Cosmos location. These impossible places, drawn from the new Cosmos deck, do not have set places they must connect to. Rather, each Cosmos card has a connecting instruction you must obey in order to place it. Torn from all you know, it may be easy to surrender to the existential dread, but even if all you can do is delay the inevitable, the battle is not over yet!

Mankind has long been confined to travel by land and sea, but a new technology has emerged from the greatest minds in Eastern Europa: airships. These steam-driven behemoths sail freely across the sky, aiding their empire's expansion through innovation and confrontation. As the years pass, the world has come to understand that no single faction will rise above the rest for any span of time. In the hope of decreasing the conflict and increasing the peace, leaders of Europa begin to gather each year to declare a new way for the factions to resolve their differences.

Scythe: The Wind Gambit, an expansion for Scythe, adds two new modules that can be played together or separately at any player count and with either the base game on its own or with other Scythe expansions: Airships and Resolutions. 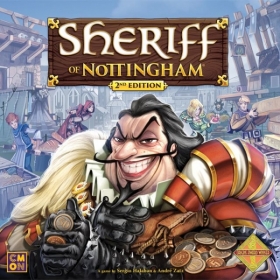 Will the Merchants get their goods past the Sheriff?

The bustling market in Nottingham is filled with goods from all over the kingdom. Most of it is entirely legal, however, Prince John is looking to make sure no contraband gets sold. He’s tasked the Sheriff to inspect Merchant’s wares, looking for any illicit goods. The Sheriff’s shrewd, but not above taking a bribe to look the other way. Which Merchant will end up getting the best goods through and make the largest profits in the market stalls?