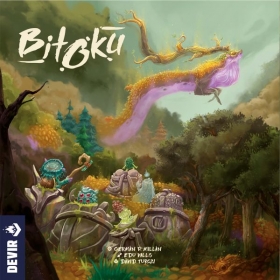 In Bitoku, the players take on the roles of Bitoku spirits of the forest in their path towards transcendence, with the goal of elevating themselves and becoming the next great spirit of the forest. To do so, they will have the help of the yōkai, the kodamas and the different pilgrims that accompany them on their path. This is a hand-management, engine-building game with multiple paths to victory.

The Wandering Sea is vast, filled with hidden treasures and lost totems. To the far south lies Zokmere, the sanctuary city, where hundreds of splintered houses cling to the jungle hills in a turquoise bay. In the northeast, the gods hide the remains of a sprawling city, and the history of their malice. Ready your crew. New dangers and adventures await.

Sleeping Gods: Tides of Ruin expands the world of Sleeping Gods with a second atlas, accompanying storybook, new adventure cards, enemies, events, and more. Seamlessly combine this expansion with the base game to make the world even larger. 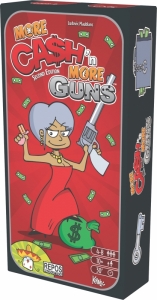 Just when you were starting to relax around your fellow thieves, crooks and criminals comes More Cash 'n More Guns, an expansion for Ca$h 'n Guns that'll have you looking over your shoulder long after the police sirens have faded.

In this expansion, you can get your hands on four new pistols, new loot cards and new special powers. The simple act of robbing a bank has never been more fun!