Snowdonia: Jungfraubahn & Mount Washington consists of two new scenarios for Snowdonia that take players away from the damp North of Wales and transport them (and their shovels) to more frozen climes! New mechanisms for the use of dynamite, new weather (snow) and new trains combine to provide a different playing experience. Jungfraubahn is a scenario for up to four players, with the yellow fifth player pieces being used as dynamite; the Mount Washington scenario handles up to five players with an amusing take on the "Surveyor". (Let's just say: "Wheeeeeeeeeeeee!") This expansion is comprised of a rulebook and a single deck of 66 cards containing: 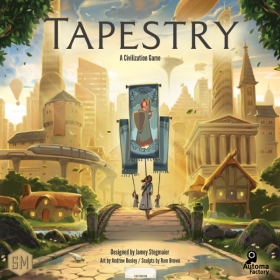 Create the civilization with the most storied history, starting at the beginning of humankind and reaching into the future. The paths you choose will vary greatly from real-world events or people — your civilization is unique!

In Tapestry, you start from nothing and advance on any of the four advancement tracks (science, technology, exploration, and military) to earn progressively better benefits. You can focus on a specific track or take a more balanced approach. You will also improve your income, build your capital city, leverage your asymmetric abilities, earn victory points, and gain tapestry cards that will tell the story of your civilization.

As you might expect from the name, Sagrada: 5 & 6 Player Expansion expands the game of dice-drafting and window-crafting so that up to six players can compete at once.

The expansion will introduce Private Dice Pool boards for a quicker gameplay experience at higher player counts. There will also be new private and public objectives, tools, and window cards.