Small World Realms
Out of Stock

Small World Realms includes scores of puzzle-like geomorphic Terrain regions that are assembled into variously sized and shaped board maps. Map designs are based on any of the 12 preset Scenarios created by the game's designer, Philippe Keyaerts. Players can also create their own maps and scenarios using the components included.

Small World Realms can be used with either of the series' base games: Small World or Small World Underground. To accomplish this, the tiles are two-sided with one side for the base game and the other for the underground version. 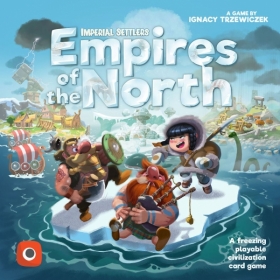 Imperial Settlers: Empires of the North

Imperial Settlers: Empires of the North is a new, standalone card game in the established Imperial Settlers universe, with players heading to the far north where three different factions live: Scotsmen, Inuits, and Vikings. Take on the role of leader, and make your faction into the best empire in the world!

Choosing the faction is only the first step, though, as each faction can be played using one of the two separate and unique decks. Yes, in the base game, players will find six pre-constructed decks ready to use straight out of the box. Each one offers a completely different gameplay style!

Develop your economy, deflect your opponent, and fight for dominance in the north. Learn new mechanisms, and experience a unique style of Imperial Settlers. Will you be able to create the most successful civilization in Imperial Settlers: Empires of the North? 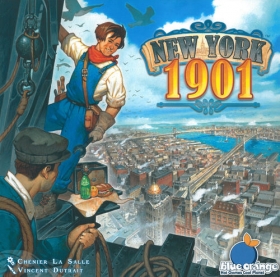 Relive the dawn of modern New York City, the historic years that made it what it is today. Build bigger and higher skyscrapers on some of Lower Manhattan's most iconic streets. Raise one of four legendary skyscrapers — the Park Row, the Singer, the Metropolitan Life, or the majestic Woolworth — and make one of them the crown jewel of your real estate empire!