Play continues until one or more of four game ending conditions is reached. After all actions for that round have been done, the player with the most victory points from settled worlds, developments, 9-cost development bonuses, and VP chips earned from consuming goods wins. 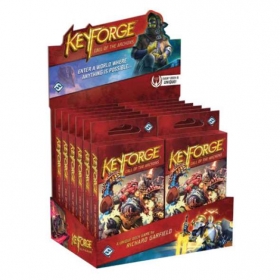 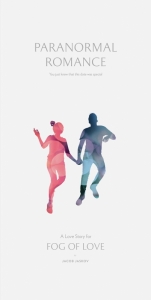 Paranormal Romance is an expansion for Fog of Love that tells a powerful, cinematic love story that will leave a lasting impression — and the best way to experience any great movie is to not know how it will end, so we won't give any spoilers away. This expansion is divided into two parts, and you can't open the second part until you've experienced the first. Once you've played it, the Paranormal Romance will echo through future plays of the game.

This expansion also comes with 24 new occupation cards that you can use to expand your character options with any story.

Paranormal Romance was included in the Kickstarter version of Fog of Love. 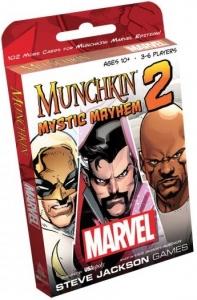 Munchkin Marvel 2: Mystic Mayhem, an expansion for Munchkin Marvel, lets players journey into mystery with Doctor Strange and The Defenders as they fight villains like the evil Baron Mordo and the Dread Dormammu. This expansion includes new Doors and Treasures as well as twelve oversized Dungeon cards that introduce powerful new threats and Allies and add a new level of mayhem and madness to the game.