Gifted with a powerful healing factor and armed with adamantium claws that can cut through anything, the hero known as Wolverine is a force to be reckoned with. Though trained as a killer by Weapon X, Wolverine has dedicated his life to helping others as one of the X-Men, and now he tears his way into players’ games of Marvel Champions: The Card Game!

Wolverine is a combat-focused hero that can pay for attacks with his hit points and unleash a relentless assault upon the villains’ forces. With this Hero Pack, players will find Wolverine, his sixteen signature cards, and a full assortment of Aggression cards inviting them to tear through their enemies. This pack also includes a bonus modular encounter set featuring the dangerous Lady Deathstrike!

For players eager to challenge Magneto and his Brotherhood of Mutants, they can get started with the Wolverine Hero Pack! This expansion comes with a 40-card pre-built deck, giving players the chance to start playing right out of the box. 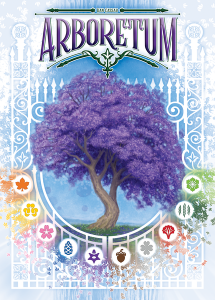 Arboretum is a strategy card game for 2-4 players, aged 10 and up, that combines set collection, tile-laying and hand management while playing in about 25 minutes. Players try to have the most points at the end of the game by creating beautiful garden paths for their visitors. 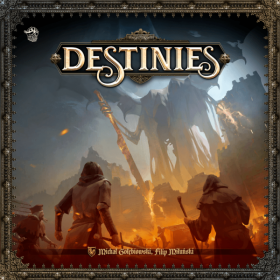 Destinies is a competitive, story-driven, game of adventure and exploration, mixing an app and a board game.

The first in a series of games using a brand-new system called Destinies. This game is set in a dark medieval-fantasy universe.

The Destinies system offers a fully story-driven, app-supported, RPG-like board game experience, without the need for a game master. Each scenario depicts a part of a vivid world, full of dark stories, epic NPCs and mysteries to solve. Each player takes the role of a hero on a quest to fulfill their destiny. Each destiny is a final goal of the character and has at least two, completely different paths to victory, composed of branching series of quests. Players compete with each other to push the world towards their own destiny. 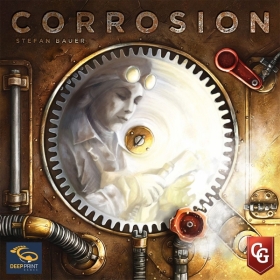 In Corrosion, each of you manages a factory and deploys engineers to build up diversified scoring and production engines. In the steam-filled air, however, your biggest enemy is time because most machines and gears rust away quickly, so you are well advised to also produce chrome gears and invest in rustproof and powerful chrome machines.