King of New York: Power Up!
Out of Stock 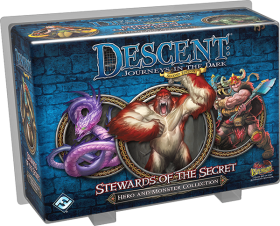 Descent: Journeys in the Dark (Second Edition) – Stewards of the Secret

Dark forces seek to recover the secrets of an evil sorcerer. Only a few noble heroes can help the order of the Stewards protect their knowledge. Take up arms with Seer Kel and her fellow heroes or reveal forbidden knowledge to call the ferrox to your side in Stewards of the Secret.

Stewards of the Secret is a Hero and Monster Collection for Descent: Journeys in the Dark.

As you might expect from the name, Sagrada: 5 & 6 Player Expansion expands the game of dice-drafting and window-crafting so that up to six players can compete at once.

The expansion will introduce Private Dice Pool boards for a quicker gameplay experience at higher player counts. There will also be new private and public objectives, tools, and window cards.