Key Flow
Out of Stock

Key Flow is a card-driven game based on many of the ideas contained in the award-winning game Keyflower. The game flows quickly over four game rounds (seasons), allowing players to develop their own unique village, with many ways to score points for their buildings, animals, keyples, resources and other items. 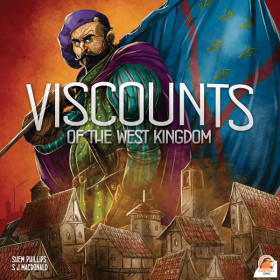 Viscounts of the West Kingdom

Viscounts of the West Kingdom is set at a time when the King’s reign began to decline, circa 980 AD. Choosing peace over prosperity, our once strong King began offering our enemies gold and land to lay down their axes. But peace is a tenuous affair. As poverty spread, many people lost faith in his ability to lead and sought independence from the crown. Since finding favour in his courts, our future has also become uncertain. As viscounts, we must be wise and decisive. Loyalty is to be upheld, but gaining favour among the people must be our priority, should there be a sudden shift in power.

The aim of Viscounts of the West Kingdom is to be the player with the most victory points (VP) at game's end. Points are gained by constructing buildings, writing manuscripts, working in the castle and acquiring deeds for new land. Players begin with a handful of townsfolk, but should quickly seek out more suitable talents to advance their endeavours. Each turn they will be travelling around the kingdom, looking to increase their influence among the various areas of society. The game ends once the Kingdom reaches poverty or prosperity - or potentially both! 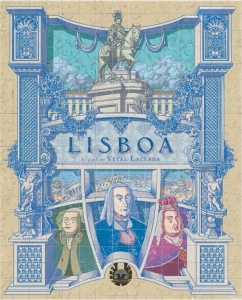 Lisboa is a game about the reconstruction of Lisboa after the great earthquake of 1755.

On November 1, 1755, Lisbon suffered an earthquake of an estimated magnitude of 8.5–9.0, followed by a tsunami, and three days of fires. The city was almost totally destroyed. The Marquis of Pombal — Sebastião José de Carvalho e Melo — was then the minister of foreign affairs and the king put him in charge of the reconstruction of Lisbon. The Marquis of Pombal gathered a team of engineers and architects, and you, the players, are members of the nobility members who will use your influence in the reconstruction and business development of the new city. You will work with the architects to build Lisboa anew, with Marquis to develop commerce, and with the king to open all the buildings, but the true reason you do all this is not for greatness or fame or even fortune, but for the most important thing of all in that time: wigs. 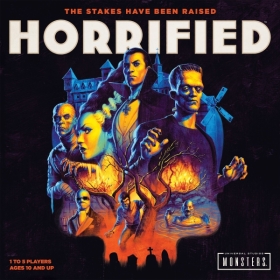 The stakes have been raised. Imagine living in a place so wretched that it's not plagued by one, two, or even three monsters — but seven of the most horrifying fiends!

In this game, you'll come face to face with them all as you work together to rid the town of the maniacal or misunderstood creatures…before it's too late.

Horrified includes high-quality sculpted miniatures (Frankenstein, The Bride of Frankenstein, The Wolf Man, Dracula, The Mummy, The Invisible Man, Creature from the Black Lagoon). Its innovative, easy-to-learn, cooperative gameplay has players working together against the monsters with varying levels of difficulty. Just as each monster is unique, they require different strategies and tactics to be defeated.