Ingenious
Out of Stock

Anyone who knows a little about Reiner Knizia's games will know that the good Doctor loves games that deal with trying to get points in various different categories and then only score that category in which the player has the fewest. In the past, Knizia has used this mechanic to develop highly complicated games, but with Einfach Genial, he has distilled the mechanic down to its purest form.

The game is played on a hex board. 120 equally sized pieces, each consisting of two joined hexes, come with the game. There are symbols on each hex that make up the piece – some pieces have two identical symbols, some have two different symbols (not unlike dominoes). The goal of the game is, through clever placement, to obtain points in the different symbol colors. Points are claimed by placing a piece such that the symbols on it lie next to already-placed pieces with the same symbol.

The game ends when no more tiles can be placed onto the board or when a player reaches the maximum number in every color. Now each player looks to see how many points they scored in the colour they 'scored the least'. Whoever has the most points in their least-scored colour is the winner. Simple.

The author of the game has also come up with solitaire and team play, in which two teams of two play with each player not being able to see his partner's tiles. 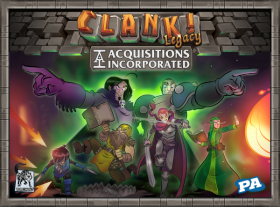 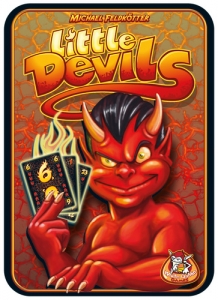 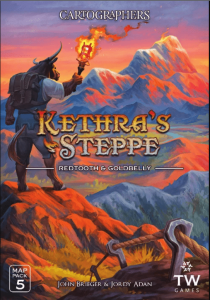 From the grassy plain of Kethra’s Steppe rise the twin spires of Redtooth Peak and Goldbelly Mountain. In addition to charting the terrain around these mountains, you must rekindle the mysterious beacons atop their summits. These fires once burned every night to represent the eye of Kethra, goddess of thresholds and gates. Queen Gimnax hopes that renewing their flames will gain her the goddess’s favor, perhaps opening the door to other worlds.

It includes 75 double-sided new map sheets featuring twin mountain spires and their beacon ranges and 3 new scoring cards, specifically for use with this map pack. Players light beacons by surrounding them and score points based on a 5th type of scoring card introduced in this map pack.