Evolution (third edition)
Out of Stock

In Evolution, players do the work of nature by putting species into play and evolving them trait by trait to help them survive in a changing environment. There are two threats that players have to deal with for their species: starvation and getting eaten by carnivores.

How to Play
Each round consists of:
1) Drawing cards: 3 cards + 1 card per species
2) Playing cards:
- Play one face-down card to determine the amount of plant food available this round.
- Play cards to create new species and modify existing species.
3) Feeding phase:
- Reveal the food cards.
- Feed your species plant food
- Attack other species if you have a carnivore
4) Clean up phase:
- Remove species that received no food.
- Reduce the population of species that were not fully fed
- Place the food in your score bag.

When the deck runs out, the players conduct one final round, then score points. 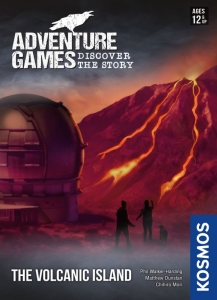 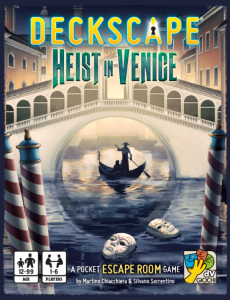 Deckscape: Heist in Venice is the third title in a series of cooperative games inspired by real escape rooms in which a group of people is "trapped" inside a room full of puzzles and odd items. The goal of the game is to solve puzzles, understand the plot of the story, and make intelligent use of the items provided in order to exit from the room as quickly as possible.

In Deckscape: Heist in Venice you are professional thieves, now retired, but a mysterious missive forces you to reunite the old gang. The mission: sneak into the oldest casino in the world, in Venice, and steal a 1 billion euro chip! Each of you has specific skills and abilities, and if you stick to the plan everything will be fine. Although, yours is a risky job, and an unexpected event could compromise the whole mission... Can you overcome the intricate security systems of the casino and then run away with the loot?
—description from the publishe 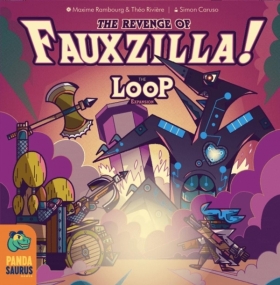 The LOOP: The Revenge of Fauxzilla

The first expansion for The LOOP brings new characters, equipments and game modes.

Your favorite evil genius, Dr. Faux, returns with a terrifying giant monster, Fauxzilla!
Will you let him wreck the Universe?