Android: Netrunner - What Lies Ahead

Android: Netrunner - What Lies Ahead
In Stock!

Android: Netrunner - What Lies Ahead

Fantasy Flight Games is proud to announce the upcoming release of What Lies Ahead, the first Data Pack in the Genesis Cycle for Android: Netrunner!

As lead developer Lukas Litzsinger explained in our announcement of the Genesis Cycle, he wanted to expand upon the concepts of identity cards, faction-specific agendas, and skill to give both Corp players and Runners "greater freedom to choose the themes that best fit them." Now, as we look forward to What Lies Ahead, the Data Pack's sixty new cards (three copies each of twenty different cards) appear ready to do just that.

What Lies Ahead adds muscle and theme to each of the game's seven different factions. Each of the corps receives a new agenda and a flavorful piece of ice, perfectly tailored to its base strengths. On the other side, the runner factions launch into the ongoing cyberstruggles with new icebreakers and support cards. Meanwhile, fans of the Anarchs and Haas-Bioroid should find the Data Pack particularly rewarding as each gains two additional cards, including a new identity. We've already revealed the new Anarch identity, Whizzard (What Lies Ahead, 1) in our announcement of the cycle, and he provides Anarch players a whole depth of new strategies based around trashing the cards they access. 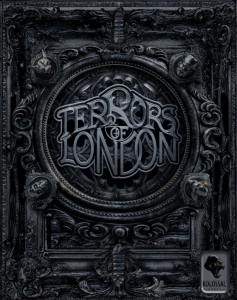 In the shadows of London, terrors stir. Powerful overlords conspire against one another, amassing hordes of monsters to do their bidding. Only one will claim the night and all within it as their prize.

Terrors of London is a competitive deck-builder with a Victorian horror theme. Each player will assume the role of an Overlord, each with a unique ability and two unique influence cards. Throughout the game players will add monsters from four different factions (Beasts, Mortals, Spirits, and Undead) to their deck, all of which can form hordes for powerful combos. Players will also procure marvelous relics, which they may immediately use for their unique abilities. The first player to reduce their opponent's life to zero wins the game and claims the night.